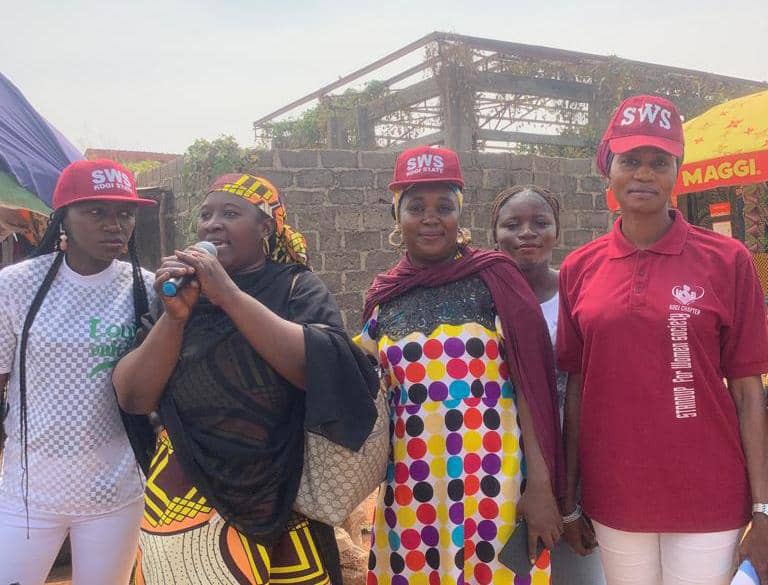 Stand up for women society national has expressed concern over millions of PVCs still lying on the desks of INEC across the country.

The Kogi State chapter has also worried over thousands over none- collected PVCs in the state, this has urged them to go on the streets and markets within Lokoja, the state capital to canvass and encourage the registered people to go get their permanent voter cards.

The SWS team, led by the state Chairperson, Muslimat Itopa said the era of snatching ballot boxes or causing violence to disrupt votes is over, she commended the Independent Electoral Commission (INEC) for introducing The Bimodal Voter Accreditation System to ensure that all Nigerians’ votes count.

The standup for women society went to Computer village in Ganaja, Lokongoma and Kpata markets all within Lokoja, the state capital to educate the people on the importance of collecting their permanent voter cards (PVCs) as well as enlighten them on how the Bimodal Voter Accreditation System works.

The state Chairperson, Muslimat Itopa with other members took turns to address the challenges some people face with BVAS and the collection of PVC after listening to their complaints.

” Chinedu and Onoja among many said ” wife and I can not collect our own because the INEC said they can not find our names. I beg the INEC to please get our PVCs, we want to vote.

Some persons who registered within Lokoja and Ajaokuta wards also complained.

They want INEC to print their PVCs for them.

After listening to would-be voters who were discouraged about how the INEC system works, they were glad the SWS came to them. They promised to visit INEC, their wards, and polling units again to collect their PVC.

Some electorate also expressed worries about how to use BVAS where to collect their PVCs and the duration of collection which INEC has extended to Sunday, January 29, 2023.

The SWS team who explained to them in English, Ebira, Igala, Hausa and Okun languages called on the INEC to do more sensitization, especially on the use of BVAS in marketplaces and in major gathering areas where we have women and young men who are occupied with trades.

The SWS has volunteered to join INEC to go places to sensitize people on the use of BVAS before the February and March elections in the country.

Amongst the team are both state and national executives.

Stand up for women is a non-governmental organisation whose objectives and responsibilities include the education and sensitization of women about happenings in the society, helping women to fight against injustice and abuse in society.