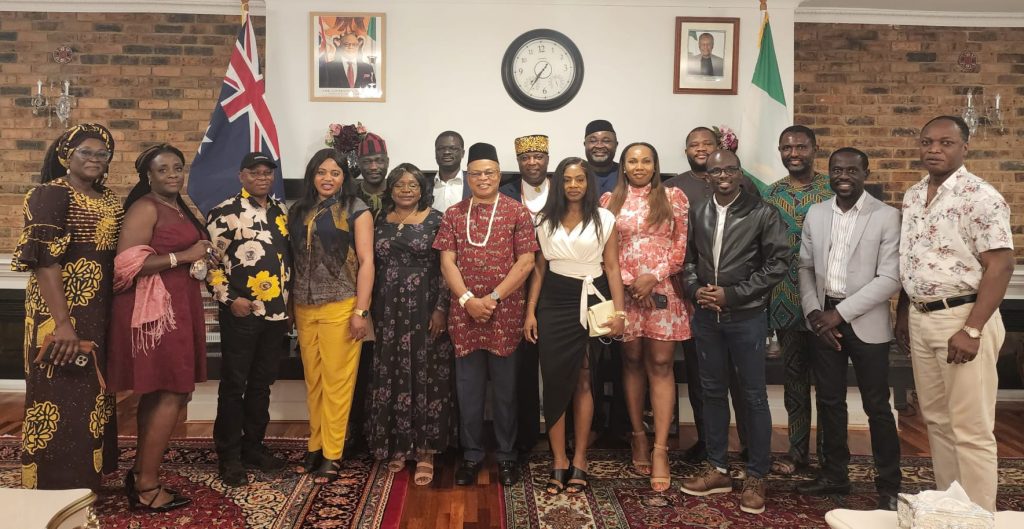 *Nigerian Mission to Push for Closer Cooperation with Australian in 2023, says Envoy*

Nigerians in Australia have pledged to do more in the coming year to promote and deepen bilateral relations between Nigeria and their host country. They also prayed that the 2023 General Elections would be free and fair, so that credible and more patriotic candidates would be elected to sustain our democracy and the development of the country.

This was made known, Friday, December 30, in Canberra, Australia, during an end-of-year dinner organised by the High Commissioner of Nigeria to that country, Ambassador Anderson N. Madubike, for a cross section of Nigerian professionals in the country. Nkem Anyata-Lafia in Abuja reports that ,the dinner, which took place at the residence of
the High Commissioner, was part of activities aimed at reviewing the events of the ending year and setting agenda for the incoming one, 2023.

Speaking to Newsmen at the end of the event, Madubike noted that the dinner provided the group the ample opportunity to review all programmes and activities embarked upon within the year. The group, therefore, made progressive resolutions that would guide their actions in the new year. Further, the envoy noted that part of the resolutions were to build a very strong diaspora organisation in the country; to strive for closer collaboration with their host country and to deepen bilateral relations with Australia and the entire Pacific
Region on Agriculture, Education, Mining, Infrastructure and others. While noting that Australia is a well-developed country with the potential
for greater collaboration and beneficial partnership with Nigeria on many areas
of interest, the Nigerian Envoy said it was unfortunate that much focus is, usually, on the Nigerian Diaspora in America, China and other countries in Europe. He said, although little was, hitherto, known about Nigerians in Australia and the Pacific Region, who, he said, are nonetheless doing the nation proud, he would, however, do his best to ensure that their diverse talents are harnessed to ensure that the potentials for mutual benefits that exist between Australia and Nigeria are fully tapped and the contributions of the Diasporans in the Australia are appreciated.

In his words, Amb. Madubike, said:

” The dinner we held for our Diaspora community here is in line with our diplomatic practice during which at the end of the year, you host Nigerians,
friends of Nigeria and, of course, use the opportunity to thank them for supporting you throughout the year and for the good work we did together. You also use the opportunity to share with them your visions for the new year.That’s exactly what we did!” Amb. Madubike, who said, he realised shortly after assuming office in the country about a year ago that the Nigerian diaspora in Australia was not so popular in Nigeria, shared his thoughts on the need to build a strong NIDO, the platform recognized in the home country, with Nigerians in that country.

He said he saw it as part of his core mandates to ensure that a strong NIDO is put in
place in Australia by next year. He further noted that the step was imperative
because the contributions of the Diaspora are very crucial to the growth and development of the country.
On how the Mission has fared this past one year, the Nigerian diplomat
said:

“In the past one year since I have been here, we tried to do the little we can, but
not the much as I had expected. We had conferences and trade delegations here
and there, but I shared with my guests the fact that next year we will do another conference and also strive to this time lead a trade delegation from Australia to Nigeria and capitalize on the opportunities that abound in Australia to
promote more bilateral relations between the both countries.

“Australia is a great country with well- developed sectors like Agriculture, Education, Mining and Infrastructure. Nigeria has a vibrant strong economy, too.
There is so much we can benefit from each other. And unlike the thinking of
many ,distance between our both nations are no barrier to building stronger relationship. Our relationship is thriving and I assure you, it will thrive better next year by the Grace of God. As I mentioned earlier, there is so much we can do for the interests of both countries going forward in areas I earlier
mentioned.”