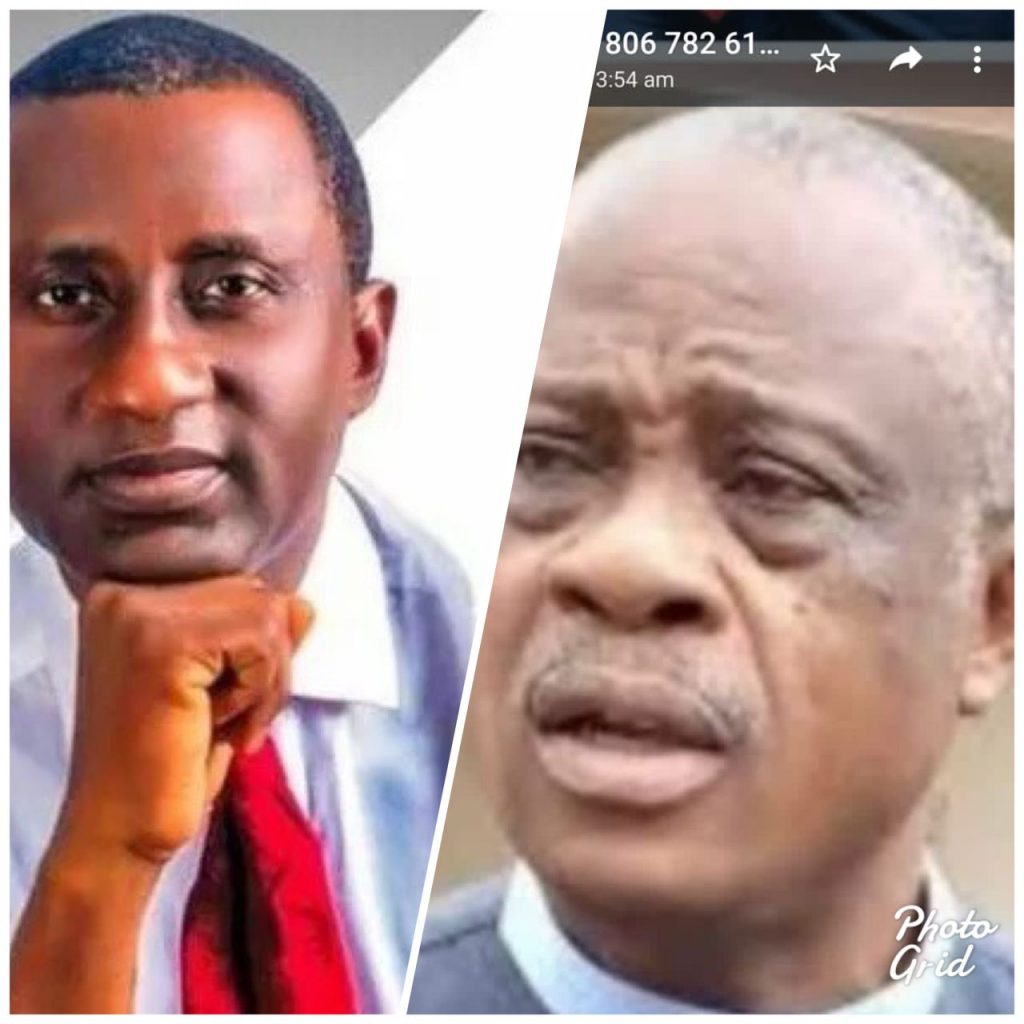 The All Progressives Congress (APC) factional candidate for Ikwuano/Umuahia Federal Constituency in Abia State, Mr. Obilo Ogbonna, in a post credited to him by the Leadership Newspaper yesterday, Sunday, December 11, 2022, while speaking on the kangaroo judgment his paymaster had as usual procured from a Magistrate Court in Umuahia, overstepped his bounds.

As one who understands the mentality of a sinking man, who would do anything to clutch at a straw as though he could be saved by it, I would have chosen to ignore his many shenanigans if only he did the usual praise-singing of his boss and paymaster, but, as the green-horn that he is in matters like the one under review, he failed to end his praise-singing where he ought to have ended it and had, in pure and puerile demonstration of his poverty of tact and experience, he ventured into misleading his readers by asking that Dr. Uchechukwu Sampson Ogah, the immediate past Minister that represented Abia in the Federal Executive Council and authentic candidate of our Party for Governor, show evidence of his 2019 campaign. Imagine the brazen and impudent arrogance of one who is struggling to be accepted as candidate for House of Representatives in our State. Only God knows how our dear State would be seen by Nigerians if this one ventured into the Green Chambers of the National Assembly!

For everyone, who has followed the development of the APC in Abia State and, indeed, some parts of the Southeast Zone, I would dare to add, it is no news that without Dr. Ogah being on that 2019 ballot as APC gubernatorial candidate, Abia APC, with all due modesty, would not have secured a single elective office victory in both the State and the National Assembly elections.

It is public knowledge, which is widely acknowledged across our dear State, that, during Dr. Ogah’s campaigns and visitations from Church to Church across the 17 LGA’s of Abia State, including other rigorous activities that had characterized his 2019 quest to present himself again to Ndi-Abia, some Clergymen had not minced words, but had told him in plain language that, but for him, they had not the willingness to ask their congregations to vote for APC. Of course, anyone who had followed or gauged the political pulse and momentum of the nation at that point in time, will understand what I am talking about. It was no hidden fact that, due to the wrong perception the people seriously had about the APC, without an Ogah as the guber flag-bearer at that material time, the message of the Party would be dead on arrival! Needless to say, the consultations, visitations and campaigns of the time were all recorded for all to see and the footages up until now remain verifiable.

In addition to the above, it is also on record that without Dr. Ogah in APC, President Muhammadu Buhari would not have recorded victory in any Local Government Area of our State. Of course, we all know the LGA’s where he won comfortably in that 2019 election. So, one wonders where the so-called Rep candidate Ogbonna got his warped notion of seeking to ask Dr. Ogah what he did with the solemn mandate of the APC in 2019. I have an idea that the Ogbonna fellow might at that material time never even know he could carry a membership card of the Party, not to talk of presenting himself for election through the backdoor as he is doing at present, following his paymaster’s usual footsteps.

Those who can readily recall know that, before the coming of Dr. Ogah to APC, the good people of Abia treated APC with so much contempt and disdain. They did not wish to have anything to do with the Party. Of course, this was going by the perception they had about the Operation Python Dance that, in the perception of many, was adjudged to have ended badly due largely to the number of lives and properties some claimed it had destroyed. Despite where any one stood on this, it no longer matters. Since, as the saying goes, the rest, is now history.

Following from the above, it suffices to say without a shred of doubt that, there is no single gubernatorial candidate for the 2023 General Elections in Abia State that has the popularity, followership and is loved by Abia people as much as Dr. Uche Ogah. None matches his antecedents and records. As the founding President of Masters Energy group, a conglomerate with vast interest in Oil and Gas, Finance, Real Estate and trading in other fast moving goods, Ogah moved the Company from ground zero to a multi-million dollar conglomerate, employing thousands of Nigerians directly and feeding millions indirectly. And as a Minister of the Federal Republic that served under President Buhari, his records at the Ministry where he held sway before resigning to contest again for Abia Governorship, will not easily be matched in the years ahead by anyone there.

To put it succinctly, Ogah has always been and remains the only nightmare of the ruling PDP in Abia State, all because his life and the trajectory of private initiatives he promoted as an entrepreneur remain a signpost of his capacity, ability, fair-mindedness, as well as his resourcefulness. All of the above point directly to the vision he will espouse if made Governor! The reality of the foregoing remains a mystery to such minds as the Ogbonnas of this world and his paymasters. If Ogah could do all these as a private citizen, they always ask, what will he do if he gets the power of Chief Executive Officer of a State like Abia? This is their haunting fear.
There is, therefore, no comparison between Dr. Ogah and Mr. Ikechi Emenike, who is a serial failure that cannot even win his Ohuhu clan for any Party he belongs to.

Mr. Ikechi Emenike does not understand the Order of Protocol, a major requirement for all who seek to assume power at the level he is eyeing.This is why recently, he met one of our Party leaders in the Aso Rock Villa Banquet Hall where the said leader, a former Senator, was recognized before him in a Party function. He was said to have immediately called his stooge, the factional State Chairman, to suspend the said leader. Is this the man the Party would want to go into the 2023 elections with? No way! Is it not surprising that, even Mr Emenike’s factional State House of Assembly candidates are praying for Dr. Ogah to be on the ballot paper with them so they can regain the confidence and trust of Abia people? I have this on sound authority and those involved know this is true and have said so in close meetings that, with Ikechi Emenike they will never win their elections. If by mistake Dr. Ogah fails to make it for the ballot (Somebody say:”God forbid!”) by 2023 elections, the Tinubu/ Shetima candidature will never make 25% of the cast votes as required in Abia State. And at that point, all APC National Assembly candidates will suffer serious setbacks. You can bank on this if the untoward happens against Ogah.

In our last checks, Mr. Obilo Ogbonna is just filling in gap for Ikechi Emenike for the Ikwuano/Umuahia Federal Constituency ticket as his stooge. He is not running for any election. And as I said earlier, those contesting for the 2023 election under APC are praying for Dr. Ogah to be on the ballot that day because they know that Mr. Ikechi Emenike’s mission is to fulfil the agenda of the Abia PDP by getting a weak candidate to fly the ticket of APC. That way, he will be making ways for their candidate to get into the Abia State Government House by 2023 in continuation of their looting agenda and underdevelopment. Ikechi Emenike’s pay masters have always been Abia PDP stalwarts since inception of the 4th Republic politics in our State. One needs not look beyond the surface to understand that this usual game of beguiling any opposition with opportunity to win Abia State is the man’s stock in trade. I will be surprised if anyone ever takes him serious this time around.