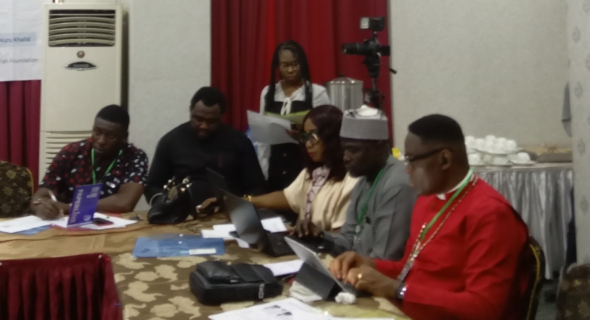 KAICIID Sensitizes young religious leaders on their roles in protecting the Holy Sites.

KAICIID Sensitizes young religious leaders on their roles in protecting the Holy Sites.

KAICIID Dialogue Centre organised a one day high level engagement with youth religious leaders, with the theme: “the protection of holy and secured sites: the roles of young Leaders today in Abuja.

The consultation which was sponsored by KAICIID and implemented by a KAICIID Fellow, Rev. Dr. Uzoaku Williams focused on youths or young leaders’ role in the protection of sacred sites.

In his paper presentation, Most Rev. Dr. B. F. Fubara-Manuel, the immediate past President Christian Council of Nigeria said the Youths are important for the simple reason that they are the energetic age group that is often employed for all things that require strength and courage.

According to him, “youths are those used as political thugs, as religious fanatics, as agents of demonic institutions and cults, as those who spread our various faiths. It is their energy that provides music, enthusiasm in prayer and worship, and now many of them are enrolling as clerics and propagators of various faiths And in our context of economic instability, youths can do almost anything to find a living.”

Rev. Fubara-Manuel, maintained that religions have a great influence on us all. According to him, “If we inform our youths right, they would do right. But we must remember that if we are truly people of faith, there are consequences to desecrating holy sites. All our religious groups must also ensure that we engage in legitimate religious development both structurally and legally. When we work within the limits of the law, we are more likely to be mindful of doing things rightly. If we leave here today as youth leaders with this right information, let us commit to ensuring that others learn same from us.”

Rev. Dr. Uzoaku Williams, KAICIID Fellow/ Programme Initiator and the Assistant General Secretary of Christian Association of Nigeria (CAN) said that the aim of the programme is to sensitize and build the capacity of young religious leaders on their roles in protecting the Holy Sites.

Dr Williams who said that Youth leaders at the national and state levels were present at the event to disseminate the information also said the essence is to impact them to enlighten others at the grass roots; as the 2023 general election is fast approaching young people will play a critical role even if they are sponsored or used as agents to desecrate Holy sit Siteses they will desist from it knowing that both Quran and Bible do not support that.

Speaking on the established laws, Imam Nura Khaid, Founder of Islamic Research and Daw’ah Foundation said that on 25th November 1981, the United Nations General Assembly passed the Declaration on the Elimination of All Forms of Intolerance and of Discrimination Based on Religion or Belief. This declaration recognizes freedom of religion as a fundamental human right in accordance with several other instruments of international law.
Stressing that Article 18 of the declaration reads: “Everyone has the right to freedom of thought, conscience and religion; this right includes freedom to change his religion or belief, and freedom, either alone or in community with others and in public or private, to manifest his religion or belief in teaching, practice, worship and observance.”

In his words:
“Establishment of places of worship is one of the various manifestations derived from the fundamental right of freedom of religion in its collective dimension. This is recognized by international a text which says to us that, among other manifestations, this freedom includes public and private worship, both individually and collectively.
“It is also relevant to recall, in this point in time, Section 38, sub section (1) of the 1999 Constitution of the Federal Republic of Nigeria (as amended) which provides as follows; “Every person shall be entitled to freedom of thought, conscience and religion, including freedom to change his religion or belief, and freedom (either alone or in community with others, and in public or private) to manifest and propagate his religion or belief in worship, teaching, practice and observance.”