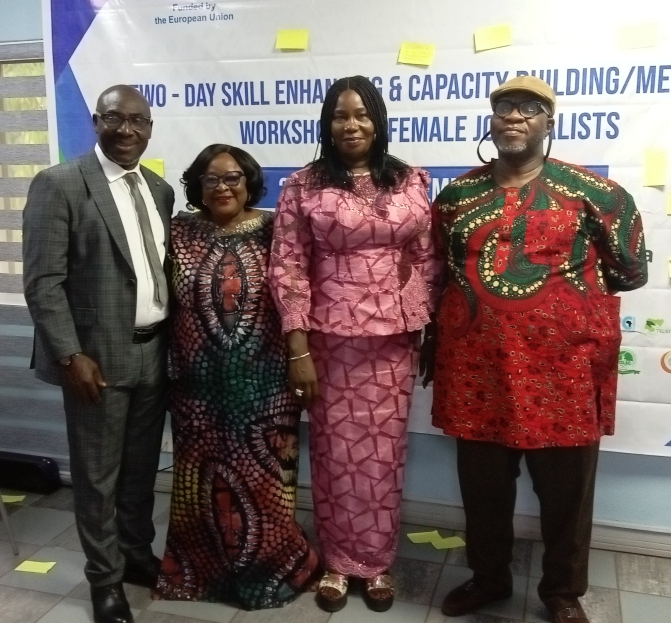 The International Press Centre (IPC) holds a two-day skill enhancing and capacity building/mentoring session for female journalists in the build up to the 2023 elections in Abuja.
The workshop is being held as part of the activities under Component 4 (Support to media) of the European Union Support to Democratic Governance in Nigeria (EUSDGN II) project, of which IPC is the lead partner.

The event which is being organised in collaboration with the Nigeria Association of Women Journalists (NAWOJ), attracted thirty-six female journalists (From the North, Abuja and a select from the South) who shall be trained to report public interest issues around the 2023 electoral process professionally and inclusively. In her remarks, the National President of Nigerian Association of Women Journalists (NAWOJ), Comrade Ladi Bala, expressed her profound gratitude to the International Press Centre and funder of the training under the EU project for investing in the building of strong democratic culture and institutions that enhances conduct of a free, fair , credible and acceptable election in Nigeria.
According to her, “The training is aimed at exposing participants to the effective tools of countering fake news, disinformation and misinformation. Media as the watch dog of the society and the practitioners as information managers have a crucial role to play in the leadership recruitment process in our great nation.
“As we all converge on Abuja, it is apt to point out that this is the second leg of the training in our deliberate determination to enhance the capacity of women journalists in Nigeria.”
Comrade Ladi further said that the International Press Centre had earlier conducted similar training first week in November, for women journalists in South East, South South and South West geo-political zones in Port Harcourt. It is a known fact that advancement in information technology and the emergence of several social media platforms have come with the challenges of disinformation, misinformation and fake news.
“From the foregoing challenges, providing accurate and verifiable information to help promote sane society is a task that must be upheld by journalists in the country.”
“In the light of this, the need to scrutinize and fact check information has become highly imperative. The media and journalists must strive to get it right by setting the right agenda for gender inclusion and persons with disabilities in the process.”
“As women journalists, let us be in the vanguard of promoting women issues, gender inclusivity and discouraging gender marginalization in the electoral process and after the elections.”

Speaking on the occasion, Taiwo Obe charged female Journalists to standout and distinguish themselves in their profession.
He stressed that Journalists should be knowledgeable in finding answers to questions. According to him, “it is about your knowledge; make it intentional to have knowledge of your coverage area. Knowledge is power. It is what you know you can write.

In her presentation, Moji Makanjuola MFR, of International Society of Media in Public Health, encouraged Female Journalists to form a good reading habit and write like Journalists.
She urged them to handhold one another work in tandem with other media community members as survival is crucial in telling the story
Other speakers includes David Ajikobi, from Africa Check, Lanre Arogundade, a Director at the International Press Center and others.
The workshop which will conclude today is meant to strengthen the media for fair, accurate, ethical and inclusive reporting of the electoral processes and elections and in particular seeks to position female journalists to be in the frontline professional, inclusive, conflict sensitive, fact-checked and data driven coverage and reportage.