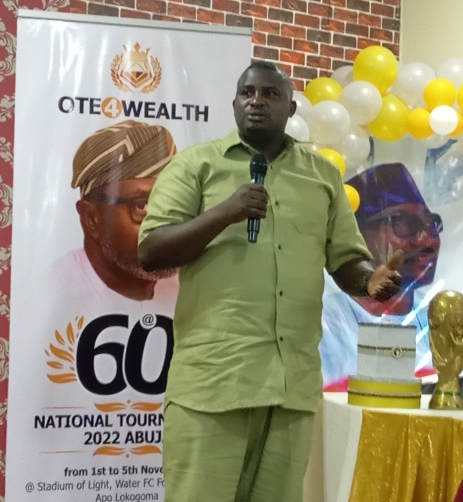 A total number of 36 teams including the Federal Territory Capital will participate in the Ote4Wealth football competition holding at Stadium of Light, Water FC Ground, Lokogoma from from November 15 to 20.

According to Makanjuola the national tournament is orgainsed to honour his mentor Otedola who clocks 60 years.

He said Otedola is just like a father, brother and uncle to him adding that there is no way to celebrate him than to organise such a championship in his name.

“I have not met in person before but I am doing this to celebrate and honour him, I cherish him so much and I pray that he lives so long to enjoy the fruit of his success,” he explained.

The overall winner of the championship will pocket a prize money of N1million while other prizes like the Most Valuable player and Highest Scorer of the tournament will be given out.

He said guests and soccer ethsiasts are expected to be present at the Lokogoma, Stadium of Light with some Nigeria Football Federation NFF members, coaches and scouts on ground.

“The final tie will witness some sort of razmatazz with a lot stands to be won,” he concluded.