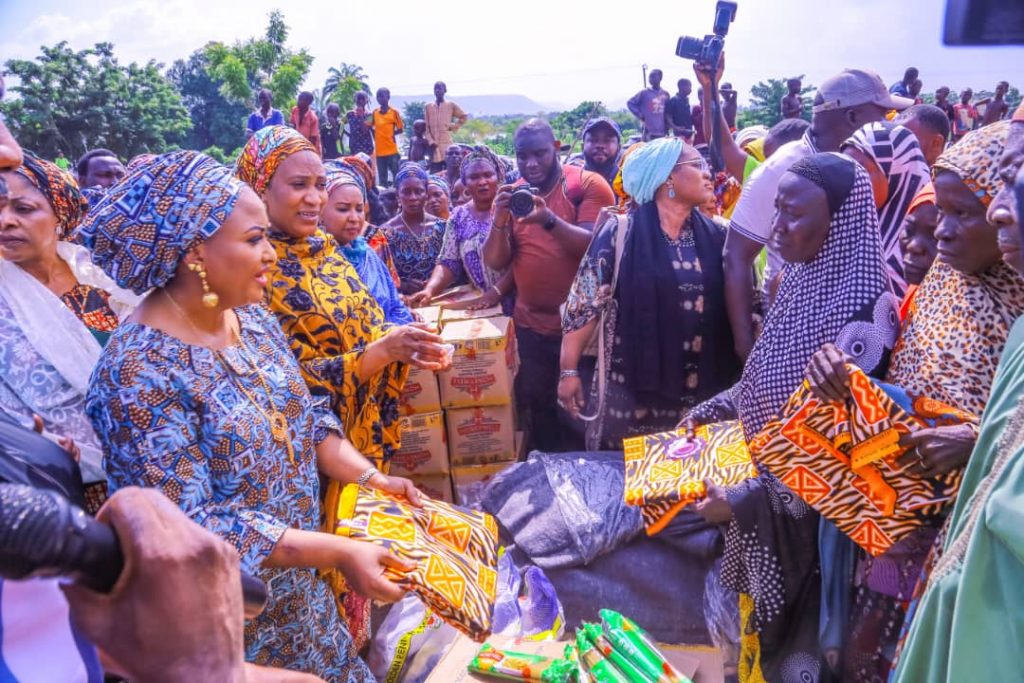 RASHIDA’S VISITS TO FLOOD VICTIMS’ IDP CAMPS CONTINUED. HER VISIT CUT ACROSS THE THREE SENATORIAL DISTRICTS AND PROVIDES SUCCOUR FOR THEM The Kogi State First Lady, Rashida Bello has reiterated her commitment to reduce the plights the flood victims face.

She gave assurance when she visited Ibaji flood victims in their camps in Idah Local Government area of the state.

Rashida Bello said though the flood is a natural disaster that cannot be stopped but the effect can be reduced.

She said “We all know that flood is a natural thing which no one can stop, is not easy but we as a government will continue to provide for the victims till when their homes will be ok for them to go back because there is no place like home.

As a government, we will make sure, you are comfortable and well taken care of here in the camp.”

In response, some of the victims commended the state governor and the First Lady for their supports.

They said the consumables and none consumables with cash will go a long way to reduce the hardship they go through.

They appealed to the Federal and State Governments to dredge the two rivers Niger and Benue and as well build Dams to serve as a lasting solution to avoid annual occurrence.

Rashida Bello who received them in Government house appreciated them for providing cash donations and relief materials to complement their efforts.

Nana said that what they brought is a token compared to what the people will need. She promised to visit again and called on well-meaning Nigerians to extend their helping hands to the victims saying they are in dear need of help.

“We are with them, we are not going to leave the burden on only his Excellency Governor Yahaya Bello and His wife, her Excellency, Radhida Bello.

Personally, I am here on behalf of our mother, and leader, Aisha Muhammadu Buhari and Her Excellency, Oluremi Tinubu to extend our widows’ myth to the victims.

I also want to add that other well-meaning individuals, please let’s be our brother’s keeper. Let us do it together” she said

In her entourage is the National Coordinator, APC Presidential Campaign Council, Women’s Wing, Asabe Bashiru; She also commended the state government’s efforts saying flood is a natural disaster that is not man-made and that the only thing to do as humans is to commiserate and give helping hands.

“Giving helping hands is what our mummy, our leaders have done because their means of livelihood have been destroyed and they need helping hands”

In response, the Chairman, Civil service Commission, Barrister Tanko, Chairman, Kogi Koto Local Government area and a host of others commended the State and Federal Government’s good gestures towards them in these hard times for the flood victims.

They were welcome with singing and dancing saying their helpers have come to their rescue.

Touch Lights, blankets, rappers and beverages are amongst the palliatives provided by the First Lady for the people at Kogi Kotonkarfi LGA IDPs camps.

Rashida Bello has visited all IDPs camps across the three senatorial districts to render her support to affected persons. She promised not to leave them at such a time as this when their homes and farmlands are submerged.

She called on humanitarians and philanthropists to also come to support them.