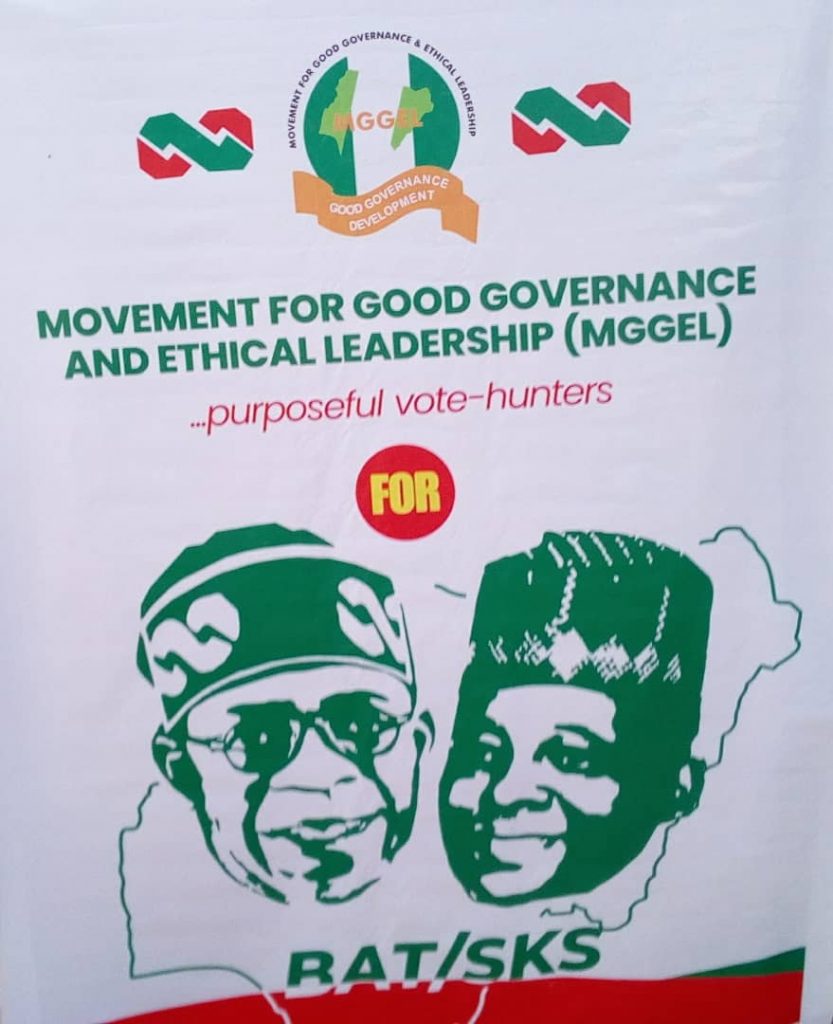 Tinubu/Shettima, the Movement for Good Governance and Ethical Leadership (MGGEL), a campaign organisation formed solely for the propagation of the leadership qualities inherent in the presidential candidate of the APC, Asiwaju Bola Ahmed Tinubu and his running mate, Sen Kashim Shettima had inaugurated on Friday, the 30th of September, 2022. The DG , Mr. H.K. Bello said group is the time tested organization which has been in existence since 2006 with delivering mandate to mobilize Millions of supporters . The group which is a veritable vehicle for the grassroots campaigns of the Tinubu/Shettima has the driving vitality to make this project a success and a reality.

” Mr. Bello in the statement also said that Tinubu has traversed the political landscape of this country like a colossus and in the process touched the lives of many through his visionary, transformative, experienced qualities as a leader. The support Group added that for the good governance and ethical leadership the Tinubu/Shettima ticket is the best product to sell to the electorates as the best team to move Nigeria forward.

Other qualities of the APC Presidential candidate according to the Statement are: Responsibility and dependability, as well as Patience and tenacity.

The MGGEL Group is considered one of the most equipped support groups to the Tinubu/Shettima ticket because of it’s strengths which lies on it’s nationwide spread with branches all over the country.

Many of the creme de la cremes of the Nigerian political class as its advisers and supporters. Its executives are made up of men and women of proven integrity , Senator Tolu Odebiyi, Sen. George Akume, Sen. Victor Ndoma -Egba , Engr. Kayode Ojo, Barr. Yusuf Hamisu , Pastor Jide Ipinsagba and Hon. Otunba Adelegbe . An amazing strength of membership that cuts across the states, local governments areas, the council areas and across the broad spectrum of the Nigerian society.

the MGGEL is therefore committed to its mandate of the propagation of this lofty leadership ideal of the Tinubu/Shettima ticket through the instrumentality of its door- to- door campaign strategy and the usage of the mass media; organising of talk shows, drama series, usage of town cries in villages and hamlets to propagate messages. The group shall not rest until the Tinubu/Shettima dream becomes a reality.

The grand patron of the Group is Senator TOLU Odebiyi , the chairman senate committee on FCT , while delivering the lecture at the inauguration ceremony on the theme: “Sustaining good governance through ethical leadership”. He said good governance and ethical leadership is a systemic way of putting good people that will deliver in the position of leadership for the purpose of productivity and accountability .

” He says the Hallmark of ethical leadership is governance, respect to rule of law, transparency , accountability , responsibility , and commitment to service while governance is delivery of Democratic dividends to people and lead them away from evils.

” He lamented that , most of our leaders in the leadership position has fail integrity test which lead to lack of trust between their followers. He said ethical leadership and good governance should be uphold at all levels.

” Senator Tolu, while addressed the newsmen at the end the of the lecture , he says the party will do more if given opportunity again . He said despite the negative challenges this administration has face for the past years now , there is something good about them . we will face this challenges , we will not run , he added!

He charged the masses to Consider Tinubu/ Shettima Ticket come 2023 as the best men for the job.