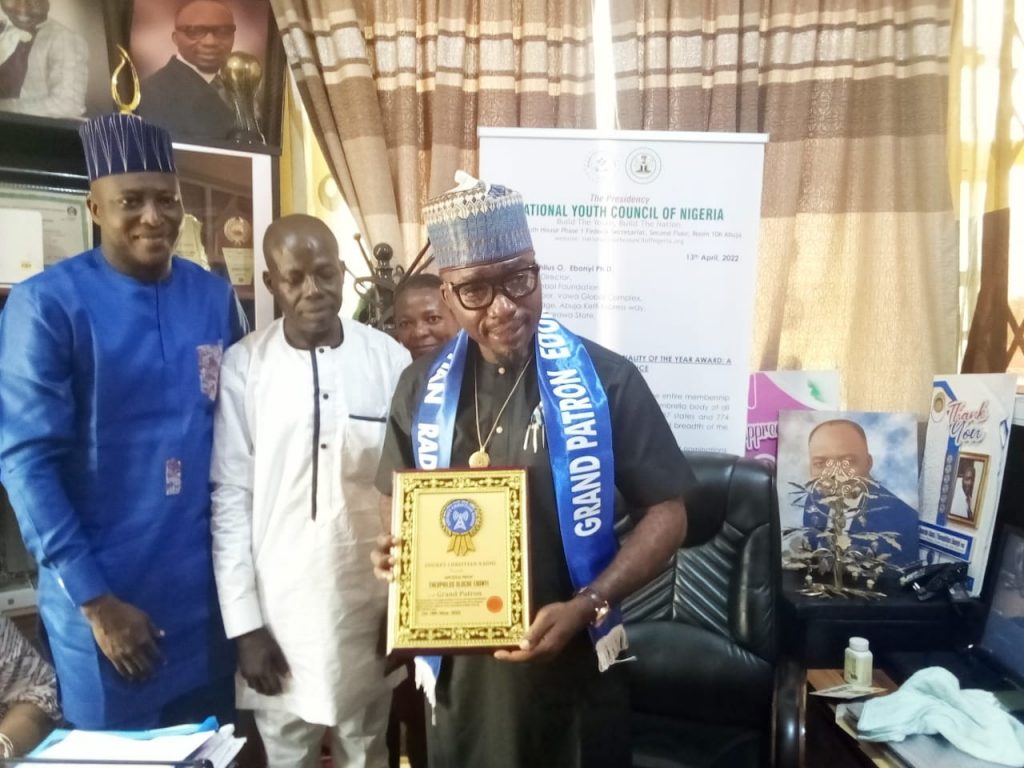 The General Managing Director of the Edukey Christian Radio , Abuja , Dr. Jonathan Aderibole , together with his management team were recently at the office of Apostle Theophilus Ebonyi to scored him a recognition of grand patron of the organization. The radio station which came to see the light of the day was the long term vision .

Dr. Jonathan Aderibole who says the Radio station will be a leading voice for Christian society here and beyond. The mandate is to promote God and his people, promised to be informative and educative where morality, spirituality , decency will be air .

While speaking shortly after the decoration and award , Prof. Theopilus Ebonyi, accepted the position and give glory to God for bestow on him such honour. He says the station will be a voice to Christian society to promote the gospel of God.

Ambassador Theo, described the position as the minestrone, and a big responsibility which cannot be trample under the feet . it is a call for strong , seriousness and hardworking. It is a dream come true , achievable and doable, it will do us good as a Christian and we will stand to defend it any where , any time for recognizing me , he added.

” He promised to stand by the vision of this Radio station mentally, and prayed that Edukey Christian radio station will not die. He maintained that if the vision is not worth dying for is a mere dream .

” This is the third responsibility I received this year, today another big Cap is been worn on me , he reemphasized that, God doesn’t commit things that will die in his hand , the station will not die . He promised to be of good help to fight for them Spiritually and otherwise.

In the same vein at the decoration venue, Bishop Fred and Evangelist Binta , maintained that Eduke Christian radio station will do Christian good by propagating the gospel of Christ. Thanked the MD for such an overwhelming vision for God . Mrs . Binta said it is on her mind for a long time to have a Christian television station but God has answer her through Edukey Christian radio station by putting it in his heart, she therefore ,pledged to be supportive in any kind.

Dr. Jonathan Aderibole, while addressed the participants, thanks the grand patron for demonstrating the gesture toward them by accepting the responsibility despite numerous schedule. He promised to use the station to the benefit of God and his people. He appreciates his management team for demonstrating love towards the vision.