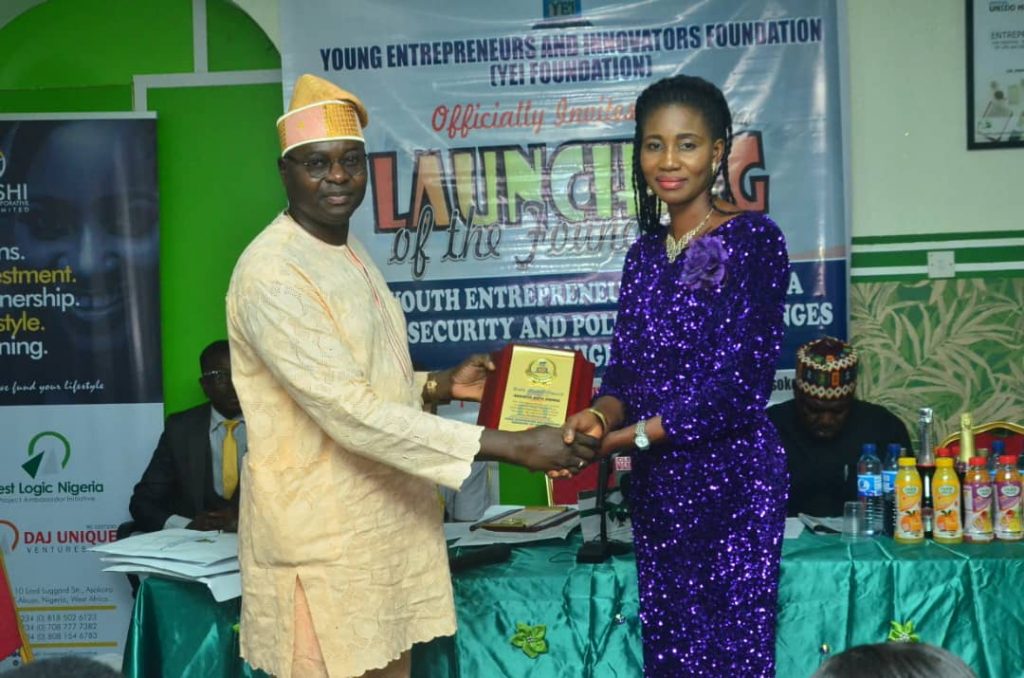 The Senior Special Adviser (SSA) to Kogi State Governor on Electronic Media, Barikisu Avoyi-Nwogu gave the advice shortly after receiving an award of “Role Model” from the occasion of the launching of the Young Entrepreneurs and innovators Foundation (YEI) in Abuja

The SSA on Electronic Media who dedicated the award to God and to Gov. Yahaya Bello who gave her the grace to serve, urged Nigeria youths to look into the future while pursuing their dreams and aspiration, encouraging them to be innovative and passion driven

She emphasized on entrepreneurship skills for the fresh graduates to become financially independent saying, that has been her driving force

In her words “Nigeria youth should not look at what is happening now, they should look at the future, they should be able to create the future they want because if you want somebody to change your world for you, you are just lying because the changes we want is starting from you, so as a young entrepreneurship, what comes to mind is I want to start, passion first, what are u passionate about, now we have graduates all over, no job for them, create one for yourself, calve a “niche” for yourself”.

She noted that “My driving force is from my inside, I hate people struggling to live, I like to see how I can raise people to be able to stand for themselves, I am not born with silver spoon or golden spoon. Even with the wooden spoon, i tried to create something for myself “

Earlier in his speech, the Director General of Nigeria television Authority (NTA), Yakubu Ibn- Muhammed, who was represented by the Iorhen kwange as the chairman of the occasion Said the young one will need to take their destiny in their hand thereby control the country.

Yakubu described the young people as having the zeal and energy to control the political environment to survive
The DG noted that , the economy will not be handed over to the youth if they are not dynamic enough to get the power

He noted that, “The would is moving, the world has gone far ahead, ICT, everything is no longer what it used to be, it will take young brain, young men and women who has gotten the knowoledge to be able to take this country and move it in a manner to be able to compete favourably among other nations, and I hope that this foundation will be a stepping stone for the youth, and those who are innovation and creative will be able to use this platform to ensure that this country is not static but will move forward”.

In his opening address, the founder and president of the foundation, Ofeoshi Abraham who briefly gave the history of the foundation said it is to provide platform for the youths to come together to overcome the challenges of unemployment

Young Entrepreneurs and Innovators Foundation was founded in 2016, a Non Governmental Organization that focuses on campaigning, inspiring and training Young people to embrace the culture of entrepreneur in other to better their life and improve the industrial sector of the economy, with the vision of improving young people.

The team of the lunching is “Young entrepreneurship: panacea for security and political challenges in Nigeria”