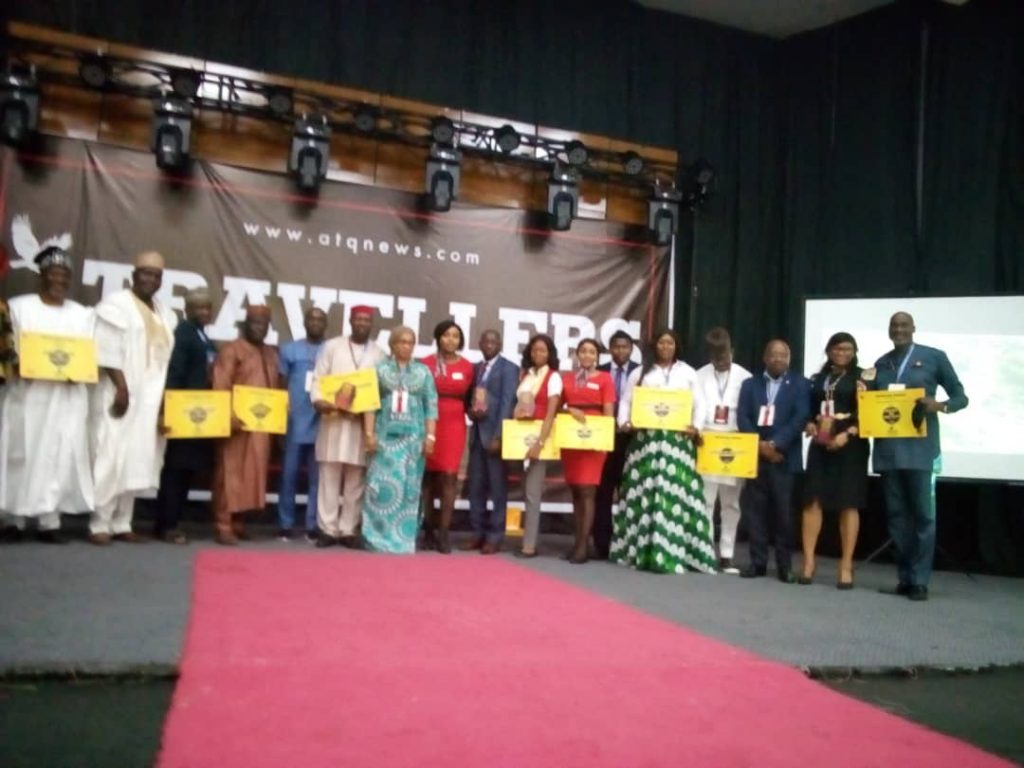 The African Quarterly (ATQ) , the first travel magazine in west Africa which focuses on travel and tourism has organized an award ceremony for the tops prominent Nigerians who have done well in the tourism sector. The event which took place at the Nicon Luxury Hotel , Abuja attracted the dignitaries from top tourism sector.

” He said next calibres from different countries will be here to grace the occasion next year.

While speaking at the occasion , the Lagos State , commissioner for Arts , culture and tourism , Mrs. Uzamat Akinbile Yusuf says tourism is a best and rapid way of generating and improving the economy of a Nation. She described the pillars of Lagos state tourism development as results oriented.

” Mrs. Akinbile says the mission is to create jobs and offers result. “We are set to promote water transportation, because Lagos is an aquatic environment

” Lagos has seven pillars within the ministry of tourism. We are using the instrument of tourism to contribute to the development of Lagos ,to reduce youthful crime. The adminstration has a stakeholders engagement to fostering better relationship. There were hybrid version of event, like world tourism Day

” while speaking on the award , she says the best is yet to come . She dedicated the award to the stakeholders for delighting to choose her out of 36 Commissioner of Tourism in Nigeria. She promised that Lagos state will continue to standout in tourism sector.

” The Commissioner said this during an interface with News men in Abuja While received an award of best Tourism man of the year by African Travel Quarterly Magazine . He advocated the citizen the need to harness, promote and market the various Arts, Culture and Tourism products to the whole world.

” Mr. Ojo Bakare Describing the Arts, Culture and Tourism sector as the third earner after telecommunication and oil, the Commissioner emphasized that country revenue will increase if tourism sector is prioritize .

” Speaking further, he cited the annual Christian pilgrimage to Jerusalem and Muslim faithful to Mecca as religious tourism which has positive impact on the economic and social development of the host countries, and urged the Tourist administrators to take practical steps at replicating same at the grassroots for economic sustainability and socio – economic development .

on March 11, 2022, this year’s Abuja Jabamah. The Aviation winners are as follows: Aviation Personality of the Year: Captain Musa Nuhu DG NCAA has received Aviation Personality of the Year for navigating the resumption of Civil Aviation in Nigeria and bringing it back to good health within 12 months. He is also credited for deft handling of the Aeropolitics issues in 2021. On the other hand, Aviation CEO Of The Year award goes to Akin Olateru for clearing the backlog of many accident.

Nosa Aituamen of Radio Nigeria has receive the Aviation Communicator Of The Year . She has converted a five-day Radio Programme into a mass media outlet with print and video linkages establishing a visibility never seen before in Aviation.

Aviation School of the Year award goes to Landover Aviation School, having produced the overall Best Student for International Air Transport Association (IATA) exams in 2021 and had the highest rate of passes for all students in 2021.

The Aviation Event of the Year is the Interlining Agreement between DANA and Ibom Air. This is a major milestone for aviation business Nigeria. Having two domestic airlines agree to join systems and collaborate has been a solution that Nigerian airlines have avoided until now.

Meanwhile, Chief Allen Onyema, the Chairman of Air Peace, received Travel Personality Of The Year award. Onyema was chosen for his consistent performance in the Aviation Business. His Airline Air Peace is the first airline to bring a brand new commercial passenger plane to Nigeria since Arik Air and Virgin Nigeria more than 10 years ago.